An Introduction to Sulfiding of Hydrotreating Catalysts

To reduce emissions of SOx and NOx from internal combustion engines, most countries strictly limit the sulfur and nitrogen content of motor fuels. The primary process refineries use for removing these contaminants from gasoline, diesel, and jet fuel is referred to as hydrotreating or hydroprocessing. In addition, units that produce renewable diesel and renewable jet fuel also have hydrotreating units for removing contaminants from their feed (eg. phosphorous, sodium, silicon, and calcium). If not separated out, these impurities can cause pressure drop in the catalyst bed, catalyst deactivation, and corrosion.

The hydrotreating process involves mixing hydrogen with sour hydrocarbon feed inside a reactor filled with Cobalt/Molybdenum (CoMo) or Nickel/Molybdenum (NiMo) catalysts. In their active form, CoMo and NiMo molecules catalyze the reactions that convert sulfur and nitrogen contaminants into H2S and NH3. These compounds will then be removed from the hydrogen off-gas stream in subsequent processing steps (e.g. Claus Unit). After hydrotreating, the hydrocarbon product leaving the reactor is an extremely clean motor fuel with a sulfur content less than 10 ppm.

Hydrotreating catalysts are produced by coating alumina extrudates with potentially active metals such as cobalt, nickel, molybdenum, and/or tungsten. In the catalyst production process, these metals are deposited on the alumina substrate in their benign oxide form and must be converted to the corresponding sulfide before they will catalyze hydrodesulfurization (HDS) and hydrodenitrification (HDN) reactions.

After a hydrotreater or hydrocracker reactor is loaded with fresh catalyst, the activation step, referred to as “sulfiding”, is accomplished by reacting the metal oxides with hydrogen sulfide (H2S) in the presence of hydrogen. This process is often referred to as “presulfiding” since the sulfiding process is carried out prior to resuming operation of the hydrotreating unit.

The sulfiding process involves passing feed spiked with a sulfiding agent over the catalyst bed in a carefully controlled procedure that includes several temperature holds. As the feed and sulfur spiking agent are heated in the presence of hydrogen and the catalyst, the sulfur compound will readily decompose to form the H2S required to complete the sulfiding reactions.

The sulfiding agents most commonly used by refiners today are dimethyl disulfide (DMDS) and tertiary-butyl polysulfide (TBPS). DMDS is used in the majority of sulfiding applications due to its higher sulfur content (68% vs. 54%) and lower cost. It also decomposes in two steps, reducing the chance of reactor exotherms that can result from sulfiding reactions.  TBPS is used in some cases where a lower decomposition temperature is desirable or methane make is an issue. Note that these decompostion temperatures only apply when the chemical is in the presence of a hydrotreating catalyst. Without a catalyst present, thermal decomposition of DMDS to H2S will not occur until the temperature exceeds 1000F. The table below compares the two most commonly used sulfiding agents. 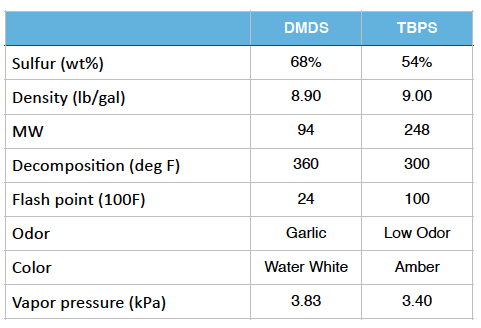 Each catalyst manufacturer has their own procedure for achieving maximum performance from their catalysts, but in general they all follow a process similar to the profile shown in Figure 1. This illustration represents a sulfiding regimen with DMDS as the sulfiding agent. The initial phase involves a drying step to remove any water that may remain in the system from cleaning during the turnaround and moisture entrained within the catalyst pores. Hydrotreating catalysts are hygroscopic and can easily absorb 2-4% water when exposed to humid air during the loading process. If the catalyst bed is heated too quickly while moisture remains inside the catalyst pores, steam will rapidly form that can cause physical damage to the catalyst particles. This phenomenon is commonly referred to as the “popcorn effect”, since rapid steam formation can fracture the catalyst in a phenomena similar to the way popcorn is formed by heating.

After the bed is thoroughly dried (typically 2-4 hours in the range of 200-250F), the “wetting step” can begin. This may seem counter-intuitive since the catalyst was just dried in the previous step, but in this case we are referring to wetting the catalyst with warm hydrocarbon feed. Only straight run feedstocks should be used for sulfiding because cracked stocks contain highly-reactive olefinic compounds. Freshly sulfided catalysts tend to be hyperactive at start up and will quickly transform the constituents in cracked stocks into activity harming coke and gums.

A heat wave will normally occur during the wetting step resulting from the heat of absorption released as hydrocarbon wicks into the pores of the extremely dry catalyst. Wetting ensures that all of the catalyst particles are evenly coated with hydrocarbon, leading to improved distribution once the sulfiding step begins.  If possible, high flow rates should be utilized to improve liquid distribution and to help flush catalyst fines from the bed that are generated during loading. High throughput will also ensure that that there is a sufficient heat sink in place to absorb the heat that is released.

Once wetting is complete, the temperature of the reactor can be ramped up to the level at which the sulfiding agent will be injected. In the past, this temperature range varied from 360-420F depending on the catalyst manufacturer, the type of catalyst, and the reactor pressure. However, we now recommend that DMDS introduction be delayed until the catalyst bed is greater than 450F-500F. This will ensure that the spiking agent is totally decomposed to H2S.  At temperatures below 500F, non-decomposed mercaptans such as dimethyl sulfide (DMS) can still be present in the recycle gas stream. If any of mercpatan-containing gas stream is purged to the flare or fuel gas header, sulfur emission exceedences can occur since these mercaptans will not be absorbed by the caustic scrubber system.

After injection begins, catalyst bed temperatures must be closely tracked since DMDS decomposition and the sulfiding reaction are both exothermic. A typical guideline will limit the delta T across each catalyst bed to 50F. Again, this will vary depending on the size and type of unit being sulfided and the mass flux through the bed.

The H2S level of the gas effluent from the reactor also needs to be carefully monitored once injection is initiated. Historically, gas content was measured by sampling the gas stream from open sample ports with draeger tubes. However, H2S is a poisonous gas, forcing operators to equip themselves with breathing air (SCBA) during the sampling operation. Nine years ago, the concept of an online H2S analyzer was introduced by Reactor Resources in order to reduce the risks of H2S sampling. The online analyzer system offers a continuous stream of data in real-time and eliminates the hazardous operation of sampling with draeger tubes.

The hydrogen purity of the recycle gas should also be controlled. If the hydrogen content drops below 70%, excess coke can be formed in the catalyst bed and the sulfiding reaction kinetic rate will slow down. As with H2S, an online Hydrogen Purity Analyzer is very useful for maintaining the proper hydrogen concentration.

The reactor temperature should be held below 520F for 10-12 hours until H2S “breakthrough” occurs.  This step is often referred to as the “first sulfiding plateau”.  Breakthrough is determined when the H2S concentration of the gas exiting the reactor reaches 3000-5000 ppm.  Prior to breakthrough, very little H2S will be seen in the gas effluent since the oxide catalyst is reacting with and consuming all of the sulfur injected into the feed.  Breakthrough is a signal that the catalyst particles in the reactor are saturated with sulfur and indicates that the reactor temperature can now be raised without harming the oxide catalyst. If bed temperatures are raised prematurely (> 520F), reduction of the metal oxides can follow, preventing formation of the active sulfide form of the catalytic metals. Breakthrough normally occurs after 50-65% of the stoichiometric sulfur requirements for the catalyst bed have been injected.

It should be noted that water is a by-product of the sulfiding reaction and its formation signifies that the active sulfide form of the catalyst is being formed.  The amount of byproduct water produced will be approximately 8-10 wt% of the catalyst weight.  In addition, ~2 SCF of hydrogen will be consumed per pound of catalyst loaded in the reactor.

Once the catalyst bed reaches 600-660F (the final hold temperature varies with catalyst manufacturer), the second sulfiding plateau can begin. This phase will normally last for 4-8 hours. During the second temperature hold, sulfiding reaction kinetics will initially accelerate, leading to an increased consumption of H2S in the recycle gas. To compensate, the injection rate of the sulfiding agent is increased while the H2S content is closely monitored.  Completion of the sulfiding process is normally indicated by the the H2S content of the recycle gas quickly rising to levels exceeding 20,000 ppm (2.0%). Once the calculated amount of sulfur injected to the unit equals the stoichiometrice amount of sulfur required to sulfide the catalytic metals in the catalyst bed, sulfiding is complete and chemical injection should cease.

Catalyst manufacturers typically recommend that cracked stocks should held out of the unit feed for at least three days after sulfiding. This delay allows a layer of soft coke to form on the catalyst surface, tempering the hyper-activity associated with freshly sulfided catalysts.  Once catalyst activity moderates, cracked stocks can be gradually added to the feed without affecting catalytic activity.

Proper sulfiding of hydrotreating catalysts is critical for obtaining optimum activity from a hydroprocessing unit.  The sulfiding process must be carefully monitored to avoid reduction of the metal oxides prior to the formation of the active sulfides and to ensure that the active metal sites are properly and completely formed. Having adequate information, such as sulfiding agent injection rates and reactor gas effluent concentration, allows precise control of the sulfiding process and avoids problems caused by excessively sour gas overloading the recycle compressor.

For more information on the optimum procedure and techniques for sulfiding your particular hydrotreating or hydrocracking unit, please do not hesitate to contact the pros at Reactor Resources.  We have a passion for sulfiding and we would love to help you out.